The Land of The Heavenly King

Toraja Tribe, its located in a Regency of South Sulawesi called Toraja Land, a picturesque mountainous region that is home to an indigenous group known as the Torajans.  For the Toraja people, life very much revolves around death, but not in a morbid sense.  For them, a funeral is a great celebration of life, much like a going-away party, and is an occasion in which the entire family of the deceased, and all the members the village take part. Their ancient traditions involve funerary customs that have been practiced over many centuries and are known to be the most complex funeral traditions in the world.

The population of the Toraja is approximately 650,000, of which 450,000 still live in the regency of Tana Toraja (“Land of Toraja”).  Most are Christian, others are Muslim, and a minority still retain the local beliefs known as Aluk Todolo (“Way of the Ancestors”), which are most visible during funeral festivities and burial customs. 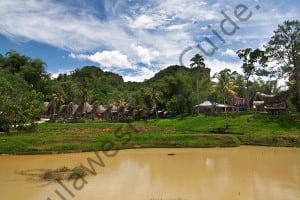 In the Toraja myth, the ancestors of Torajan people came down from heaven using stairs, which were then used by the Torajans as a communication medium with Puang Matua, the Creator.  The cosmos, is divided into the upper world (heaven), the world of man (earth), and the underworld.  At first, heaven and earth were married, then there was a darkness, a separation, and finally the light.  The Torajans traditionally believe that death is not a sudden, abrupt event, but a gradual process toward Puya, the afterlife.

The Aluk Todolo belief system still very much governs the life of the society, demonstrated by Toraja cosmology, ceremonies, settlement arrangement, houses, decorations, the role of water buffalo, and of course, the funerary customs.  According to UNESCO, the Torajan cosmology represents an ancient cosmology common to pre-state Southeast Asian communities which is now vanishing.

Before the 20th century, Torajans lived in autonomous villages, where they practised animism, the worldview that non-human entities, including animals, plants, and often even inanimate objects or phenomena possess a spiritual essence.  They were relatively untouched by the outside world until Dutch missionaries arrived to convert the Torajan highlanders to Christianity.  Nevertheless, even those that follow other religions in Tana Toraja, still converge when it comes to ancient funeral customs. 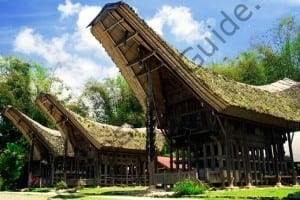 During their lives, the Torajans work extremely hard to accumulate wealth. But unlike other societies, the Torajans do not save their money to give themselves a good life, rather they save for a good send off in death. In fact, it is the extravagance of the funeral, not the wedding, which marks a family’s status.

Funeral ceremonies are incredibly important to the Tarajans and are often held weeks, months, or even years after the death of a person to give the family of the deceased time to raise enough money for expenses – a body is not buried until the funds have been raised.   Many people go deeply into debt in order to hold a funeral ceremony and it is not uncommon for a young man, afraid of being burdened by debt, to postpone or cancel his marriage if a grandparent of the girl he loves is old enough to die soon.  The funerals are raucous affairs involving the whole village and traditionally last for days or even weeks.  Specifically, a funeral reinforces the eternal bond between the living and the dead. 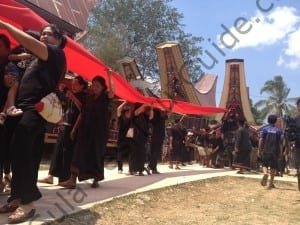 When a Torajan dies, family members of the deceased are required to hold a series of funeral ceremonies, known as Rambu Soloq, over many days. During this time, the deceased is not buried but is embalmed and stored in a traditional house under the same roof with his or her family.  Until the funeral ceremonies are completed, the person is not considered to be truly dead but merely suffering an illness. The dead relative is referred to simple as “a person who is sick” or “the one who is asleep”.  Remarkably, this could even last several years after death, depending on how long it takes the family to raise money.   During this time, the deceased family member is symbolically fed, cared for and taken out, and is very much a part of their relative’s lives.

Their ceremony begins when funeral visitors attend a buffalo-slaughtering field. Family members are required to slaughter buffaloes and pigs as they believe that the spirit of the deceased will live peacefully thereafter, continuing to herd the buffaloes that have come to join him or her.  Before being sacrificed according to a strictly defined procedure, the animals take part in trials of strength known as tedong silaga.

After the sacrifice, the meat is distributed to the funeral visitors in accordance with visitors’ positions in the community, and the spirit of the deceased is also entitled to a portion of meat, known locally as Aluk Todolo. The heads of the buffaloes are returned to what is locally known as puya (a site for the soul or spirit of the dead person) and their horns placed in front of the house of the kin. The more horns that decorate the front of the house, the higher the status of the deceased.

The body is not buried until the eleventh day of the ceremony, although they are not technically buried – the final resting place is in a cave up on the cliff. The soul of the deceased is thought to linger around the village until the funeral ceremony is completed, after which it begins its journey to the land of souls.

A wood-carved effigy called tau tau, carved with the likeness of the dead person is then placed in the balcony of the tomb to represent the dead and watch over their remains.  Unfortunately, so many tau tau effigies have been stolen to be sold to tourists that people have started to keep them in their homes.

In one region, known as Kete kesu, the dead are not placed in cliff-dug graves, but in wooden caskets hanging from the side of cliffs. The coffins are beautifully decorated with geometrical shapes, but over time the wood begins to rot and the bleached bones of the deceased often become exposed. 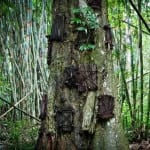 The smallest of the Toraja burial grounds are the “Baby Trees” where the tribe’s young are placed. If a child dies before he has started teething, the baby is wrapped in cloth and placed inside a hollowed out space within the trunk of a growing tree, and covered over with a palm fibre door.  The belief is that as the tree begins to heal, the child’s essence will become part of the tree. Dozens of babies may be interred within a single tree.

Ma’Nene Ceremony – The Ceremony of Cleaning Corpses in Toraja Land

Every year in August, a ritual called Ma’Nene (The Ceremony of Cleaning Corpses) takes place in which the bodies of the deceased are exhumed to be washed, groomed and dressed in new clothes. Damaged boxes are fixed or replaced.  The mummies are then walked around the village by following a path of straight lines.  Following these straight lines is maybe the most important part of the ceremony. According to the myth, these lines are connected with Hyang, a spiritual entity with supernatural power. As this entity only move in straight lines, the soul of the deceased body must follow the path of Hyang.

According to the ancient Torajan belief system, the spirit of a dead person must return to his village of origin. So if a person died on a journey, the family would go to the place of death and accompany the deceased back home by walking them back to the village.  In the past, people were frightened to journey far, in case they died while they were away and were unable to return to their village. 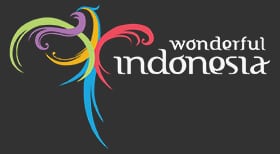